Not so fast pardner – there’s a problem with your calculation. If you bought those shares in a taxable account, about 80% of your $.52 distribution would have been return of capital, and would have decreased your cost basis by ~$.42. 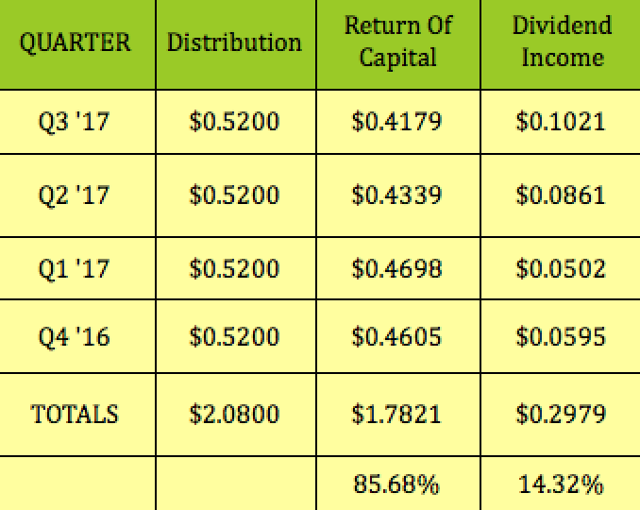 So, your taxable short term capital gain would = $.42, plus the normal 15%-20% tax on the qualified distribution.

This problem wouldn’t have arisen, if you had bought AMZA in a tax deferred account, such as an IRA. AMZA also gets rid of K-1’s, and possible UBTI tax issues for IRA holders.

Sounds great right? But, there’s another problem, which SA contributor Trapping Value did a good job of explaining in his recent article about AMZA.

It’s about AMZA’s dividend coverage, or lack of it. The following info is from AMZA’s most recent financial statement, for year ending 10/31/17. It shows that their dividend coverage was only 60% for the last 2 fiscal years:

Here’s a quarterly breakdown, which shows the coverage increasing slightly, but only up to 62% in the most recent fiscal quarter:

As the statements show, the fund made ~54% of its income on distributions from its underlying holdings, with the remaining income from writing and selling options. Looking at the funds underlying LP buys/shorts and its options sales and purchases shows a rather complex operation, to say the least, but one item stood out to us – its large position in the United States Oil ETF, (USO), and in the United States Natural Gas ETF, (UNG). 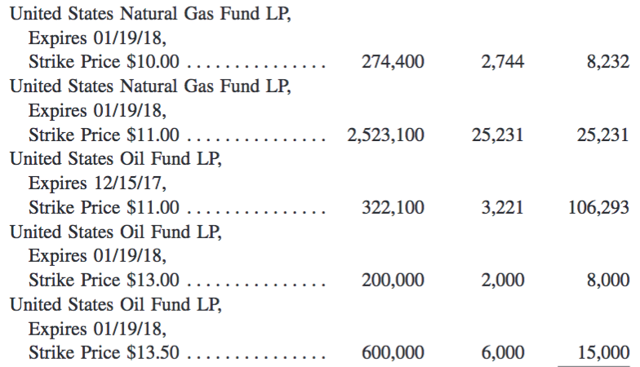 That made us wonder if there was a correlation in price between AMZA and USO and/or UNG. It seems that AMZA and USO correlated fairly closely, especially in mid-2016 to mid -2017. This makes sense, USO is used as a proxy for the price of US oil. If oil prices crash, as they did in 2015, it eventually affects midstream companies, (especially those which have a lower % of fee-based contracts). (AMZA is the light purple line, and USO is the thicker magenta line.)

In October 2017, however, the AMZA/USO correlation fell apart, when USO headed north, and AMZA headed south, after its 10/3/17 ex-dividend date.

This made us curious, so we took a look at AMZA’s short positions. As it turns out, they had a minor short position in USO, as of 4/30/17. 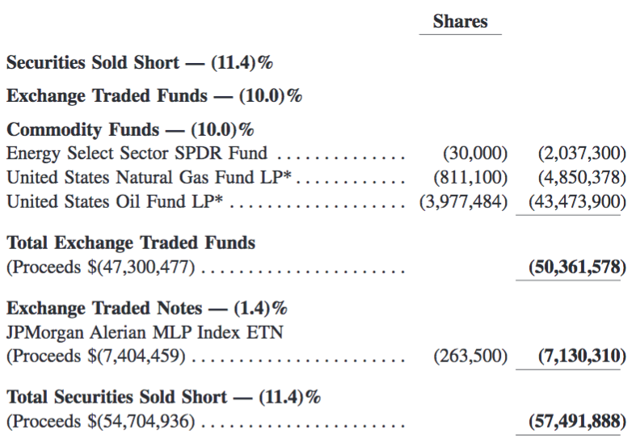 The other factor in this was also post ex-dividend trading – AMZA’s shares often tend to fall after its ex-dividend dates. 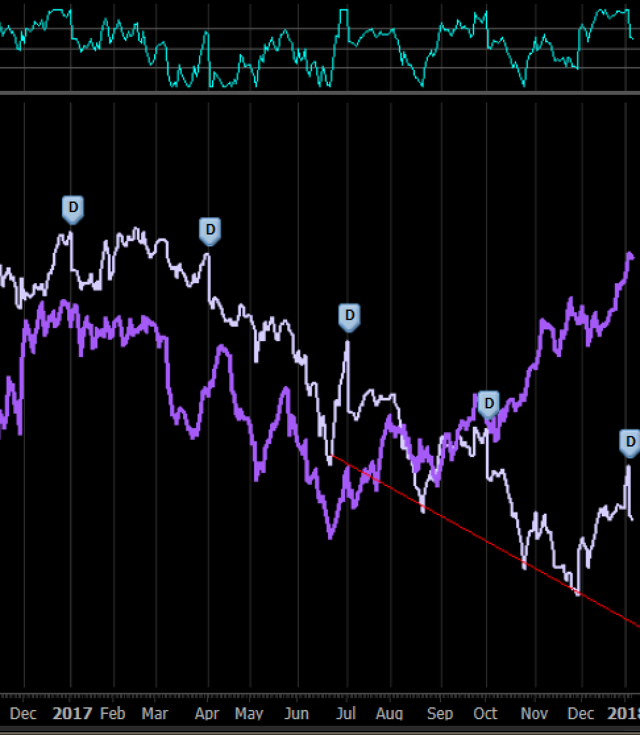 Given this trend, it makes you wonder if taxable account short term traders would be better off buying and selling AMZA in between its distribution dates, and avoid the quarterly distributions. That may sound counterintuitive, but those valleys and peaks sure look interesting, in hindsight.

As usual, though, the problem is figuring out when to buy, and not catch a falling knife, as buyers found out in 2015, when oil crashed, AMZA went south with it. 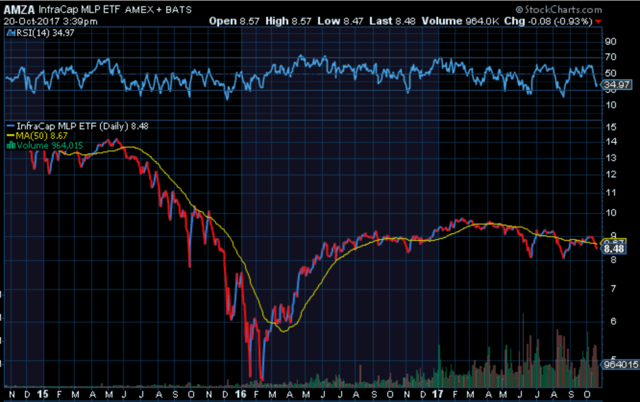 Energy Transfer Partners LP (ETP) still heads up the list – in fact its now over 20% of the fund’s holdings, as of 1/5/18. We covered ETP’s recent rejuvenation in one of our recent articles.

As you may have heard, MLP’s are finding favor once again in the market, partially due to a more favorable tax rule – shareholders of pass-through entities, such as Energy MLPs, may now deduct 23% of the attributable income, before being subject to any taxation.

In addition, the new tax bill contains a bonus depreciation provision that allows all companies to immediately write off the full costs of capital improvements, instead of depreciating the new asset over time.

Couple the tax breaks with better oil prices, and you get a more upbeat attitude toward midstream MLP’s, which has played out in the past month. AMZA’s top 10 holdings are up anywhere from 5% to nearly 12% over the past month. Even with this recent resurgence, however, they’re mostly showing negative performance over the past year, excepting WPZ, EPD, and MPLX: 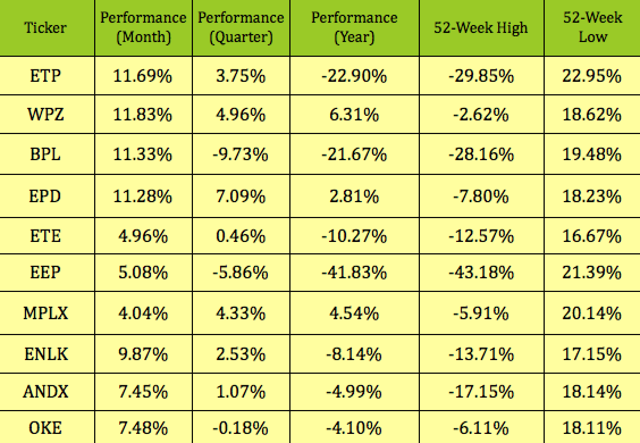 And there’s still a wide disparity between most of these LP’s unit prices and analysts’ average target prices – ETP, for example, is still 24% below its target price of $24.70, even though is has risen 11.7% in the past month: 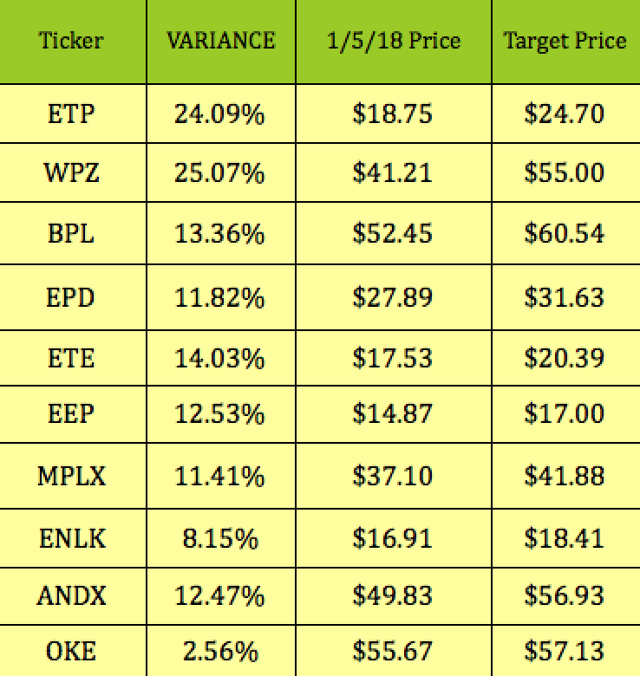 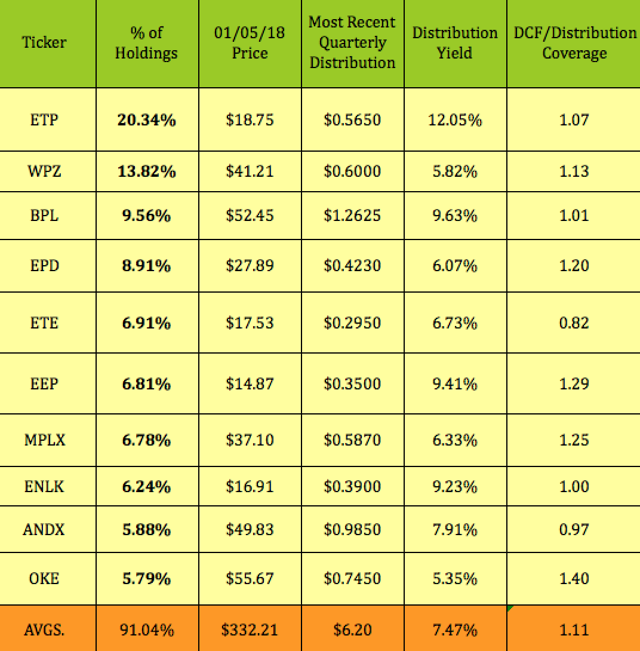 We took a look at various EPS projections for these LP’s. Although EPS isn’t the most meaningful metric for LP’s, (due to non-cash depreciation adn amortization charges knocking down net income), we wanted to get a general sense of growth projections for this group.

Yes, that 1750% growth figure is ridiculous – (we haven’t been smoking wacky tobacky) – it’s only that high because ENLK is projected to swing from a -$.02 loss to a $.33 gain). At any rate, you can see that there’s a lot of growth expected from these companies in 2018, with an average of over 25% for the group. 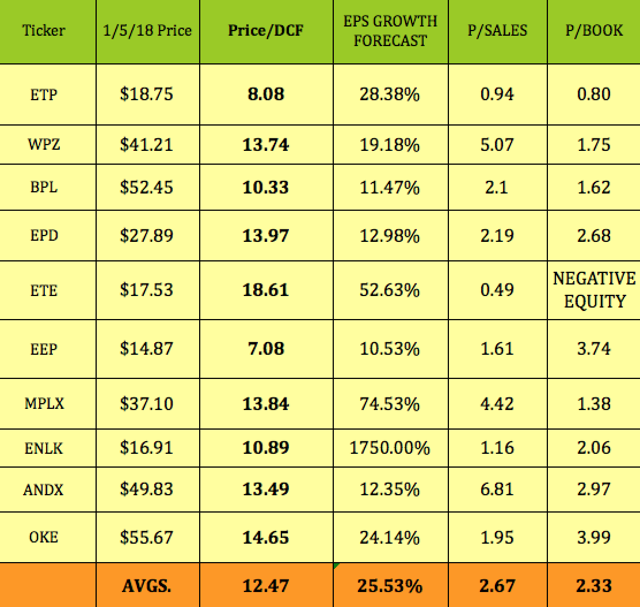 WPZ has the lowest leverage in the group, at 3.46x for Net Debt/EBITDA, and.72 for Debt/Equity.OKE has the best ROE and ROI, with ANDX, EPD, and BPL also showing strong figures. EPD wins the ROA race, followed by BPL, and ANDX, while ANDX and EEP have the highest Operating Margins. 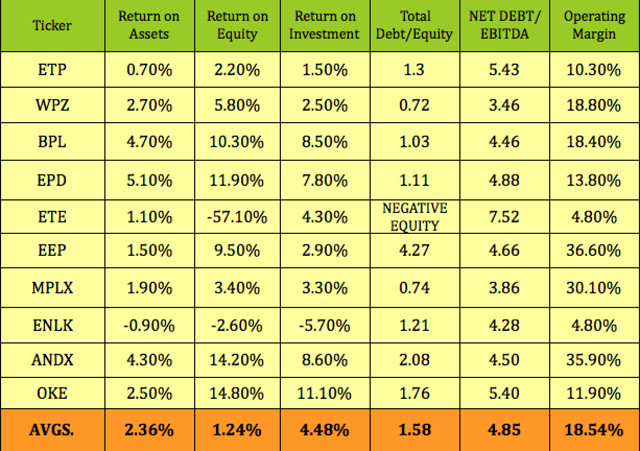 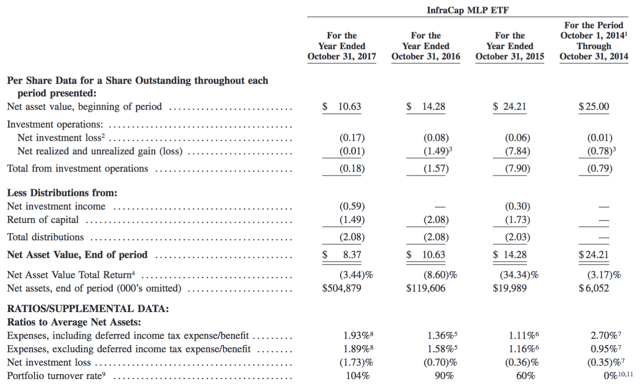 So, what to do? With all of this good news about MLP’s, you’d think that AMZA could get some support from the market in 2018, which should support its NAV. This remains to be seen, and the declining NAV, and poor distribution coverage are big concerns.

We like the concept of the fund – it does solve some problems for IRA holders, giving them very high yield exposure to the MLP universe, without K-1 and UBTI hassles. Normally, we’d be long term holders in this type of investment, in an IRA, where the ROC wouldn’t bite us if we chose to sell. But, we wonder how long the fund will continue to pay $.52/quarter, which continues to decrease its NAV.

If they do cut the distribution at all, how will the market react? There are probably investors with IRA’s who were lucky enough to have bought it for under $7.00 in early ’16 – they may be approaching a breakeven below $4.00, so they could weather a further decline in price.

For now we’ve chickened out, and sold our AMZA shares, and we’ve opted for investing directly in some of the underlying LP’s, such as ETP, which is up 6% in the 2 weeks since we wrote about it.

Although it doesn’t yield 24%, this covered call trade for ETP is one way to generate a higher yield. It’s on our Covered Calls Table, along with over 30 other trades.

If you want to play it even more conservatively, here’s a March put-selling trade that pays $.85, and gives you a lower breakeven of $17.15. You can see more details in our Cash Secured Puts Table.

All tables furnished by DoubleDividendStocks, unless otherwise noted.

Disclaimer: This article was written for informational purposes only, and is not intended as personal investment advice. Please practice due diligence before investing in any investment vehicle mentioned in this article.