Virgin Hyperloop One Is Bringing Elon Musk's Dream to Life 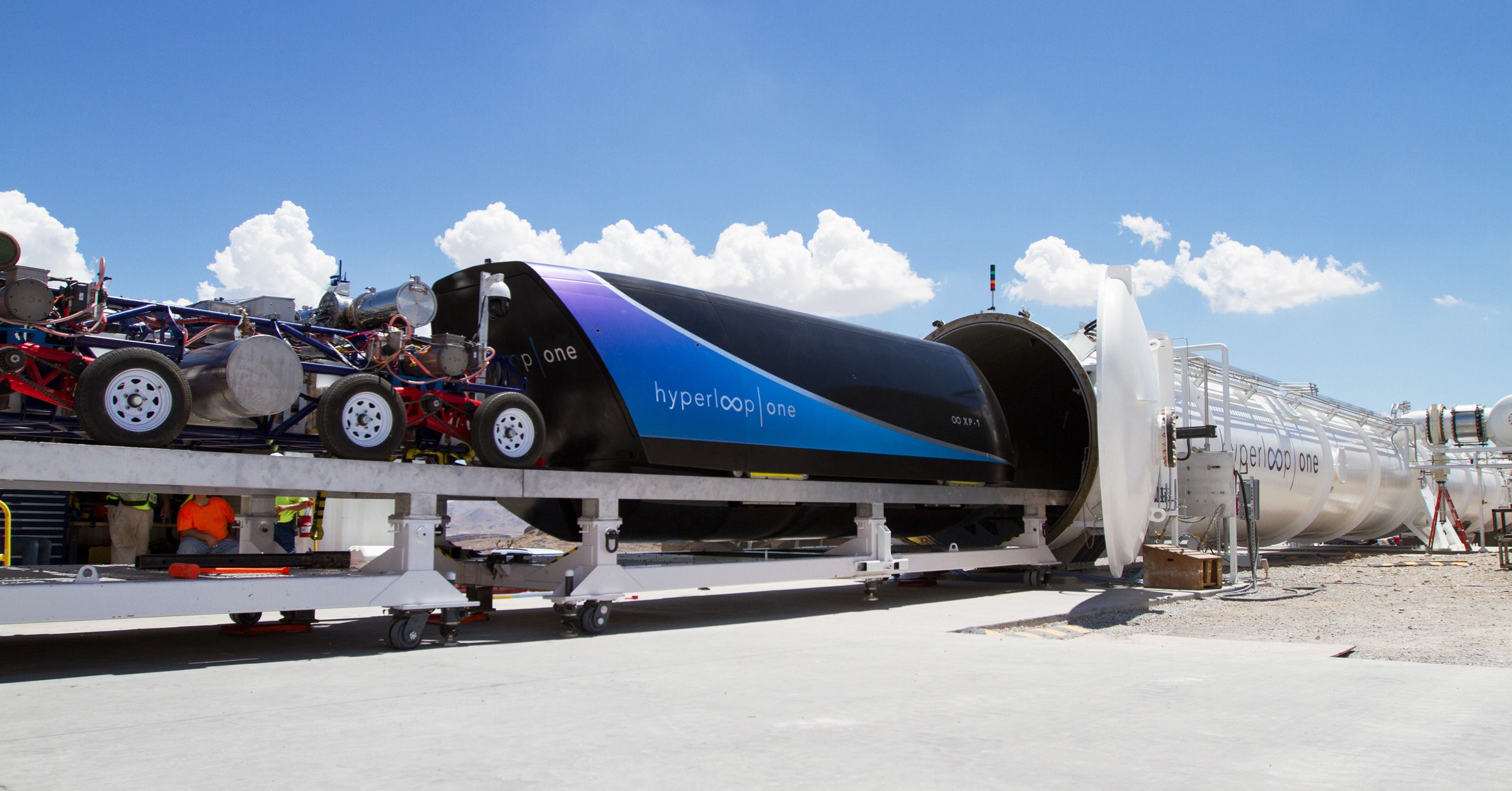 When the hyperloop first sparked a frenzy in 2013, it was just an Elon Musk Big Idea—very exciting, maybe possible, definitely hard to believe. Now, five years on, a version of the futuristic, tube-based transportation system is taking shape in the Nevada desert. Some 35 miles north of Las Vegas, the terrain is all sand, rock, and spiky shrubbery, leading up to stunning reddish mountains on the horizon. It’s a world just isolated enough for Virgin Hyperloop One to build a giant white tube and not attract too much attention, apart from the few local tortoises that the secluded engineers have adopted.

“We did this whole construction in around 10 months,” says Kevin Mock, senior test engineer. This is the first time the LA-based company has let any media in to see its test site, and as we walk around one end of the tube, I get the full impression of its length for the first time. One third of a mile long and nearly 11 feet in diameter, and reflecting the orange of the setting sun, it’s just painted steel, wrapped with a few strengthening loops. “It’s similar to a water pipe, but it was made to our specific specifications,” Mock says.

The Big Idea reached the world when Elon Musk published a 57-page white paper outlining his thinking for firing levitating pods, carrying passengers or cargo through nearly airless tubes, at speeds up to 700 mph. Busy running both Tesla and SpaceX, Musk invited anyone interested to make it a reality. Virgin Hyperloop One (originally known as Hyperloop Technologies, then Hyperloop One, until Richard Branson came aboard as chairman in December) is one of the companies that materialized to give it a shot.

The hyperloop bears the Muskian hallmarks of radical futurism, but its brilliance is in the fact that it won’t take a revolution to build one. It’s really just a collection of existing transportation and industrial technologies. It’s a chimera, part elevated structure, metal tube, bullet train, pressure vessel, and vacuum system, all smooshed together. The challenge is integrating them without smooshing paying passengers—or profit margins. Hyperloop One think it can launch a commercial system in 2021, which is why it’s out here in the desert, with its test tube, aka DevLoop. This is where the company is working out the myriad engineering challenges, trying to make a system it can deploy commercially.

To suck the air out of the DevLoop, Hyperloop One used a row of small pumps, housed in a metal building to one side. These are off the shelf components, typically used in steel factories or meat processing plants (it’s probably better not to ask for details). They can drop the pressure inside the tube to under 1/1000th of atmospheric conditions at sea level, the equivalent of what you get at 200,000 feet. By that point, the few air molecules left are not going to get in the way of a speeding vehicle. At the right hand end of the tube, one section of pipe, about 100 feet long, operates as an airlock. A 12-foot steel disc slides across to separate that chunk from the longer tube, so that pods or other vehicles can be loaded in and out without having to pump the whole tube down to vacuum, which takes about four hours.

The company plans to run these tubes along pylons, which should be easy enough, and lets it avoid some of the engineering work that comes with laying heavy rail tracks along the ground. This short tube isn’t quite level, sloping down with the contour of the land, which a production system could do, gently, too. “That allows us to minimize the cost of the civil structures while keeping our elevations in check,” says Mock.

Where the tube meets each T-shaped pillar of concrete holding up the 2.2 million pound structure, sits a sliding bracket. Any civil engineer has wrestled with metal’s habit of expanding and contracting as temperatures change, and the Hyperloop crew in the desert is no exception. Even this relatively short section of steel changes length by several feet. “It moves a lot, and we had to account for that in the design,” says Mock. A full sized Hyperloop, running, say, 350 miles from LA to San Francisco, would need some sort of sliding expansion joints, which the company says its design will accommodate.

Since introducing its prototype pod to the tube last summer, Hyperloop One has completed some 200 test runs at varying speeds, collecting data on every variable it can track. In December, it went for pure speed, sending the pod to 240 mph in just a few seconds—a new hyperloop record. (Expect to see a lot of those in the next few years.)

“We plan to have a single type of pod that can do both cargo and people,” says Anita Sengupta, who’s in charge of systems engineering. Moving inanimate cargo is a logical starting point, since you can’t kill it if something goes wrong, and Hyperloop One has a few use cases in mind, like moving containers from the Port of LA to an inland depot, so polluting trucks don’t have to crowd through congested urban areas.

The company has plenty of competition in the race to realize Elon Musk’s dream. Arrivo, founded by Hyperloop One co-founder and former top engineer Brogan BamBrogan, plans to build a “hyperloop inspired system” in Denver. Student teams around the world compete in a SpaceX-sponsored challenge, using a short tube Musk built in Los Angeles. And the Big Idea Man himself seems to be back in the game, saying he’d like to pop a hyperloop or two into the tunnels he’s digging around the country.

Of course, solving these engineering riddles only gets you part of the way there—then come the fights over land rights, the environmental impact studies, the political wrangling. and the funding questions that make infrastructure one of the toughest businesses around. But if Hyperloop One can cut through it all, this patch of desert will likely see a lot more visitors who aren’t there to see the tortoises.

Loop There It Is