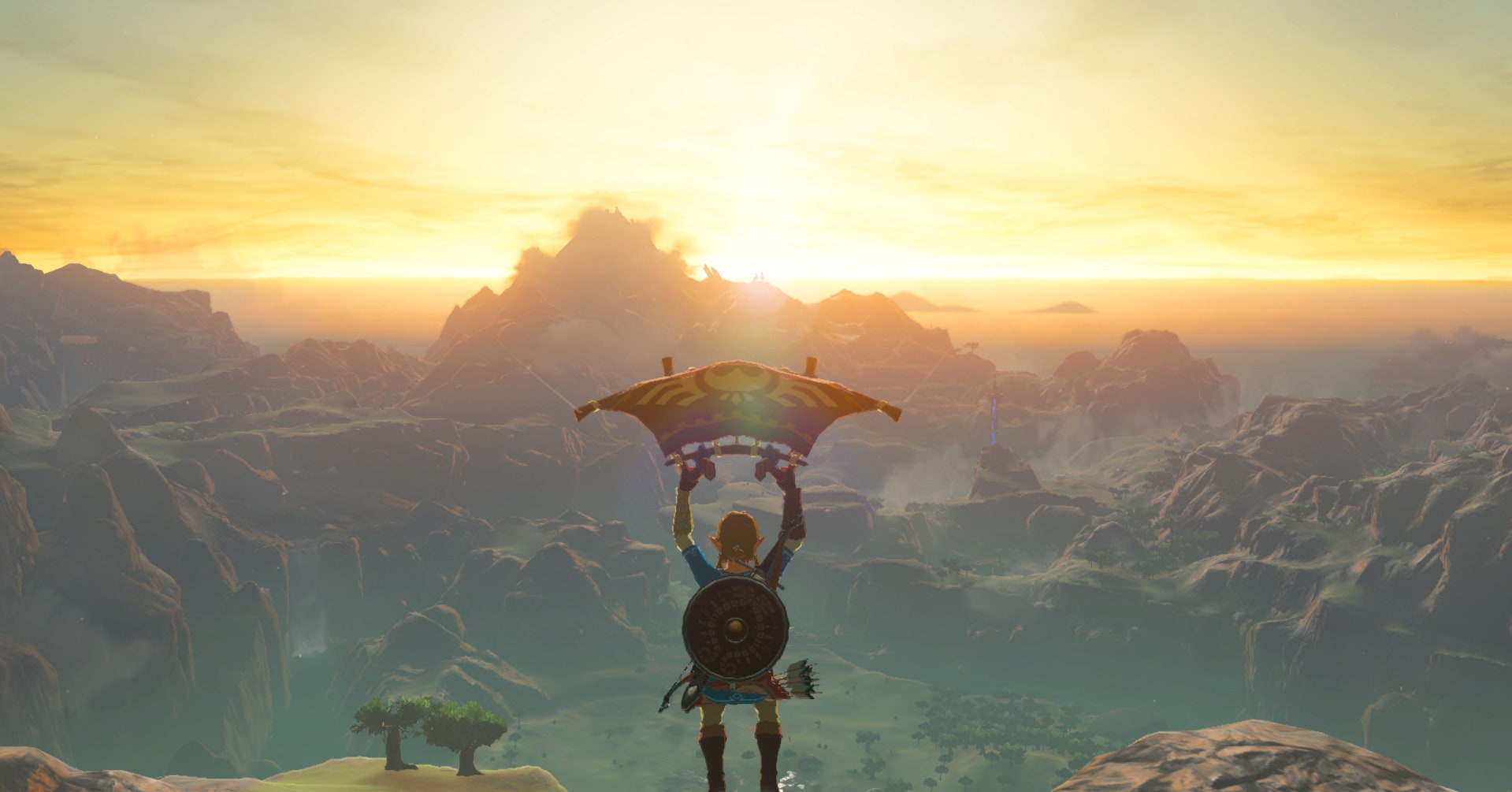 2017 was an incredible year for videogames—a mixed bag of genre, style, and mood. The best titles ranged from sweeping adventures to tense shooters to meditations on the existential burden of life. Some of the games released this year will go on to be lauded as the most important, profound videogames of this generation. If you don’t know how to dive into videogames in the coming days, here is where to start.

Virtual reality’s great promise has always been that of escape, and nowhere has that been put to better use than in Ready At Dawn’s captivating, compelling space adventure. Half puzzle-heavy exploration, half zero-G playground, Lone Echo delivers what traditional gaming cannot: a truly embodied adventure. Most of that is due to an ingenious locomotion mechanic, which eschews the all-but-default teleportation to lets you move through the game via combination of thrusters and pushing off solid surfaces. The disc-golf-in-space multiplayer companion, Echo Arena, has become a fan favorite, but it’s Lone Echo that will be remembered as a singular, medium-defining game.

You might begin life as a polar bear. Or a kangaroo. Or a twig. Maybe a mitochondria. Then you might grow and reach with your mind and perception until you’re a galaxy, or the sun, or the magic of consciousness itself. In David O’Reilly’s meditative masterpiece, you can be, literally, everything. Everything derives power from a logic of interconnectedness, weaving a philosophical fable about the nature of objects while teaching the player a mechanical dance that surprises and stir. You ever wondered what the world looked like from the perspective of a soda can? Now’s the time to find out.

In Resident Evil 7, you open doors by pressing into them, face first. It’s a neat little metaphor: the act of moving forward is an act of dogged, perhaps irrational, persistence. In this brilliant revival of one of gaming’s originary survival horror franchises, it’s the sort of subtle touch that goes a long way. And Resident Evil 7 is full of subtle touches: the scattered trash in the derelict rural manor your hero is trapped in; the unsettling, flowing, almost oil-y design of the game’s monsters; the way videotapes are used to create a hallucinatory alternate reality experience while also playing with found footage horror tropes. Resident Evil 7 is two-thirds a brilliant horror adventure, and one-third a solid action game. It’ll undoubtedly be frustrating when the horror starts to run dry, but every step taken on the way is more than worth it, if you have the courage to get that far. Play in VR at your own risk.

Taking place in Tokyo’s Red Lights District during the late 80s and early 90s, Yakuza 0 is one of the most riveting, carefully crafted dramas ever put in front of a videogame controller. It’s also a game where one of your main characters uses Street Fighter moves and random objects on the street to fight vengeful clowns. Yakuza 0 manages an impossible alchemy, merging a self-serious crime drama largely about real estate with some of the goofiest and off-beat supporting material the creators at Sega could come up with. It feels, on the whole, like a love letter to what videogames are capable of. Games are places where powerful, fascinating drama can happen. They’re also places where a giant dude named Mr. Shakedown will chase you through the streets of Tokyo and try to steal your cash until you learn how to beat him up with a baseball bat. Yakuza 0 sees the dissonance, and it loves it. And you’ll love it, too.

Splatoon 2 is the rare multiplayer shooter that has the power to reach beyond the core “gamer” marketplace that those games usually cater to. Part of that is the platform: the Nintendo Switch is a console built for people who hate the nonsense of modern videogame consoles, and that gives any game on it an allure it might not otherwise have. But more than that, it’s in the design. The squid-kid world of Splatoon is bright and playful, awash in colorful ink, aquatic pop stars, and Harajuku high fashion. And cleverly, the designers use this aesthetic to create a shooter that actually doesn’t employ violence at all. Victory is a matter of covering as many surfaces and enemies with ink as possible. Nobody gets hurt. Splatoon 2 is a marginal refinement of the original game, and that might make it less compelling for returning players, but the core of the experience remains so solid and wholesome that not changing enough can hardly be considered a flaw.

Hellblade: Senua’s Sacrifice is a controversial game, largely because of a single page of text that appears before the experience even begins, claiming that Hellblade is a story about mental illness, specifically psychosis, and that care has been taken to make that representation thoughtful and accurate. Whether or not that’s true, or to what extent telling that kind of story is appropriate in a game mostly about obscure puzzles and hack-and-slash combat, is a question worth debating. But Hellblade is, at its heart, a game that rises above those conversations, and above the sum of its own components. The story of Senua, a warrior journeying into the land of death in search of her lost love, is an uncanny screaming death knell of pain and perseverance. It’s held together by the brilliant work of Melina Juergens, whose motion capture and vocal acting as Senua is possibly the best performance in the entire medium. Hellblade is flawed, sometimes monotonous and sometimes infuriating, but it’s unlike anything else I’ve played this year, and its imagery and sound will stay with me for a long, long time.

At its best moments, Nintendo’s flagship Mario title for the Nintendo Switch feels like Super Mario at his best. His most surreal, his most silly, his most unpretentiously fun. Operating out of an effortless dream logic, Super Mario Odyssey is the story of Mario Mario (that’s his real name, I swear) travelling across the multiverse to crash a wedding party with the help of his friend, a cap that has the power to possess anything in the world that doesn’t have its own hat. The cap’s name is Cappy. This premise doesn’t require you to understand or accept it. You just have to follow it, jumping, flipping, and wah-wah-wah-hoo-ing to whatever unlikely, unpredictable turn it offers next. If it had Luigi, and left some of its insensitive cultural tendencies behind (Mario, take off that sombrero, please), Super Mario Odyssey would be perfect.

I have spent roughly half my time with PlayerUnknown Battlegrounds hiding in a shed. Surprisingly, that’s not a complaint. PlayerUnknown Battlegrounds has a simple premise, one with surprising power. Take a large map, a derelict Eastern European city, perhaps. Fill it with a hundred players. Litter weapons around, some vehicles, some traps for funsies. Last player alive wins. This straightforward idea, literally cribbed from a movie, imbues every single moment of Battlegrounds with tension. Every movement in the grass, every shadow out of the corner of your eye, could be one of 99 other players with you in the crosshairs. Under that kind of scrutiny, every single microdecision becomes terrifying. Which is how I find myself hiding in a shed, over and over and over again, aiming a shotgun at a door that may never open. But let me tell you: hiding has never been so riveting.

The commanding image of Breath of the Wild is a sweeping vista. Encountered roughly five minutes into the game, this vista–a wide shot of a whole continent’s worth of wilderness, open and ready to be explored–is a promise. Lots of videogames offer this promise, of freedom, of unfettered and truly organic exploration, but most fail. So many game worlds feel empty, and dead, and basically constructed. Which, in a very real sense, they all inevitably are. But some special games have enough of their creators in them that their worlds feel real, and beautiful, and are able to pass off the illusion that you’re not just running through handcrafted levels but through a full, living place. Breath of the Wild is one of those games, and it uses such a place to deconstruct and resurrect the mythology and ideas of The Legend of Zelda, a game that was originally very simple: a story of a boy, and a big, scary place, and the promise of someone he loves at the end of the journey. No sequel in this series’ thirty years has so captured the elegance and joy of that story. And now it’s hard to imagine how any other game after it could.

WIRED made one significant mistake with its gaming coverage in 2017: we never reviewed Nier: Automata. This is my fault. I came to the game a month or two late, and there was no room for coverage in our calendar. And yet Nier: Automata is so excellent, such a significant contribution to the medium of gaming and to my own life that I cannot in good conscience place any other game in the #1 spot. It’s the story of two androids caught in an ancient, horrible war, but that explanation doesn’t do Nier: Automata justice. It is a genre-hopping, brilliantly written, intricately crafted magnum opus about persistence, and love, and hope in the face of absolute loss. Game director Yoko Taro has famously said he makes “weird games for weird people,” but Nier: Automata might be for everyone.