Tesla Board Fiddles As Model 3 Falters

About a year and half back, we wrote a series of articles about how SolarCity was in financial distress contrary to the narrative of Chairman Elon Musk and SolarCity executive staff.

What happened in that scenario was that SolarCity’s loss generating, cash burning business model was exposed when interest rates on debts climbed. With capital markets closing in, that episode ended with Tesla (TSLA) acquiring the troubled SolarCity. History shows management sold a bill of goods to Tesla shareholders. As to be expected, SolarCity’s business shrank dramatically since that acquisition.

The Company’s already reduced goals have been revised down yet again recently when Tesla announced Q4 delivery numbers. As we have pointed out earlier, the Model 3 status in that press release was intentionally vague and attempted to suggest a higher production rate than reality.

It has been over three weeks since this press release and we now have incontrovertible data that shows that Tesla is nowhere close to the proclaimed 1,000 Model 3’s per week production level. VIN tracking at various sources including Tesla Motors Forums and Model 3 VIN Tracking shows that only about 1000 vehicles may have been manufactured between the end of December through the third week of January. In the most optimistic scenario, Tesla may have produced at most 500 cars per week during the last three plus weeks. That is at best 10% of the rated 5,000 unit per week production.

This production has also been plagued by quality problems as we have been forecasting for a while now. Even though the Company appears to have delivered only a few hundred Model 3s to non-employees, internet forums are flooded with quality concerns. Here are some examples of some problems that customers have reported:

This shows an extraordinary high number of problems for a car that barely shipped a few hundred units.

So, where does Tesla go from here?

But, with current production around 1/10th the planned speed, coupled with customer reports of abysmal outgoing quality, suggests that the production line and the car itself are still in the early stages of debug. Given this, 2,500 units production run rate exiting Q1 seems highly unlikely.

We now estimate that full line rate production of 5,000 units per week is unlikely before Q3 at the earliest. It is probable that this production rate may not be sustainable in 2018.

In a very curious way, the above manufacturing problems seem to be occurring in an environment where Model 3 reservation holders seem to be hesitant to convert their reservations into firm orders.

How do we know that?

Note that reservation holders from June of 2017 are already able to configure their cars! This is a stunning development.

This is extraordinary given that Tesla’s previously communicated roll out plan was to keep initial units in California so that it can more easily serve these cars which it knew were likely to be problematic.

Given the quality problems we are witnessing, one would think that Tesla would keep all the Model 3s close to the factory for debug and repairs.

Another interesting trend that shows a curious lack of appetite for Model 3 is the speculator sales pipeline on eBay. On eBay, we find that most of the Tesla Model 3 cars for sale are not attracting even a single bid at the modest premiums being sought by speculators.

We should also note that Tesla started selling to non-employees after it gave priority to its own and SpaceX employees and investors. Tesla seems to have run out of employee and investor purchases before Model 3 hit couple of thousands of units of production.

It is becoming increasingly evident that the demand for the current long range Model 3 at close to $50,000 is extremely limited. This should not be surprising to our readers since we have previously forecasted that Model 3 demand for higher priced trims will be low as most reservation holders are likely expecting a $35,000 car.

The bottom line is that none of these choices are a positive for shareholders. Nevertheless, Tesla needs to do something soon to incentivize current reservation holders to convert at a larger rate.

Q4 Results Will Not Be Pretty And Q1 Is Looking Weak

In terms of recently concluded Q4, we already know that shipments for Model S and Model X exceeded expectations. The nearly 30,000 in car sales is a record but the sales came through inventory clearance, special promotions, and with a big hit to gross margins.

On a positive note, we suspect that gross margins for Model S and Model X in Q4 could be better than management expectations due to the strong year-end demand for Model S and Model X due to concerns about Federal Tax Credit expiration. On the flip side, the gross margin for Model 3 is almost certain to be worse than expectation. It is difficult to estimate the gross margin on the combined vehicle mix due to these opposing vectors. Nevertheless, regardless of any small improvements in gross margins, Tesla will show material deterioration in all core metrics.

A $500M loss for the quarter, excluding ZEV credits, is likely.

Based on management guidance of capex spending being tied to Model 3 production, Q4 will be yet another big quarter for Model 3 related capex. Capex burn will likely exceed $1B for Q4 unless Tesla has been able to dramatically throttle down service center and supercharger capex spending.

Looking ahead, Q1 demand is looking extremely weak based on public order tracking spread sheets. Q1 may very well turn out to be the softest Q1 in a long time.

In essence, looking at past, present, and future, there is virtually nothing for investors to celebrate about.

The Absurdity Of Tesla Board’s Thinking

With all of the above problems at hand, what does Tesla board do?

It comes up with a radical new compensation system for Elon Musk. Much has already been written about Mr. Musk’s proposed compensation plan. 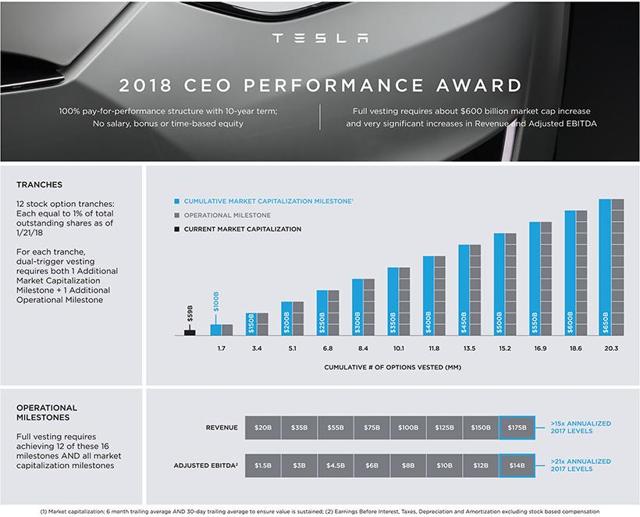 The performance metrics tell us several things about Elon Musk and the Tesla board:

To have any credibility on the earnings call, the Company needs to show progress on Model 3 ramp. However, Model 3 status, despite Company’s narrative of reaching 1,000 cars per week production rate at the end of Q4, seems highly problematic.

With a lot riding on selling a good Model 3 story, investors should find Model 3 manufacturing and demand trends disconcerting.

It should be alarming for investors to see an executive compensation pan tied to mediocre peer group with 15% gross margins and 8% EBITDA margin. Is this a message from Tesla board that the Company has already resigned to a mediocre fate on Model 3? And, that the Company will continue to burn cash for the foreseeable future and no profitability should be expected?

At this point in time, we are highly skeptical of the Tesla Model 3 ramp and doubt that full capacity utilization can be reached in 2018. This will cause tremendous losses and cash burn at the Company for the rest of 2018.

Under the current circumstances, we find little to cheer at this company. Beyond investor faith, there is very little to stop a dramatic valuation compression.

For timely, cutting-edge insights, analysis and investing ideas of solar, battery, autonomous vehicles, and other emerging technology stocks, check out Beyond the Hype. This Marketplace service gives you early access to my best investing ideas, along with event driven and arbitrage opportunities when they are most edgy and actionable. If you want expert advice on seeing through the hype, separating fact from fiction, avoiding investing landmines in emerging technologies, and an opportunity to participate in a vibrant and intellectually stimulating real-time chat room with other high-caliber, like-minded investors, consider subscribing to Beyond the Hype today.

Additional disclosure: Author’s investment philosophy is long only and author does not short. Shorting is a sophisticated investment strategy that requires superior investment skills and must be avoided by all but experienced investors with the appropriate skill and wherewithal.