Solar May Never Power Your EV, But You Can Still Drive on Sunshine 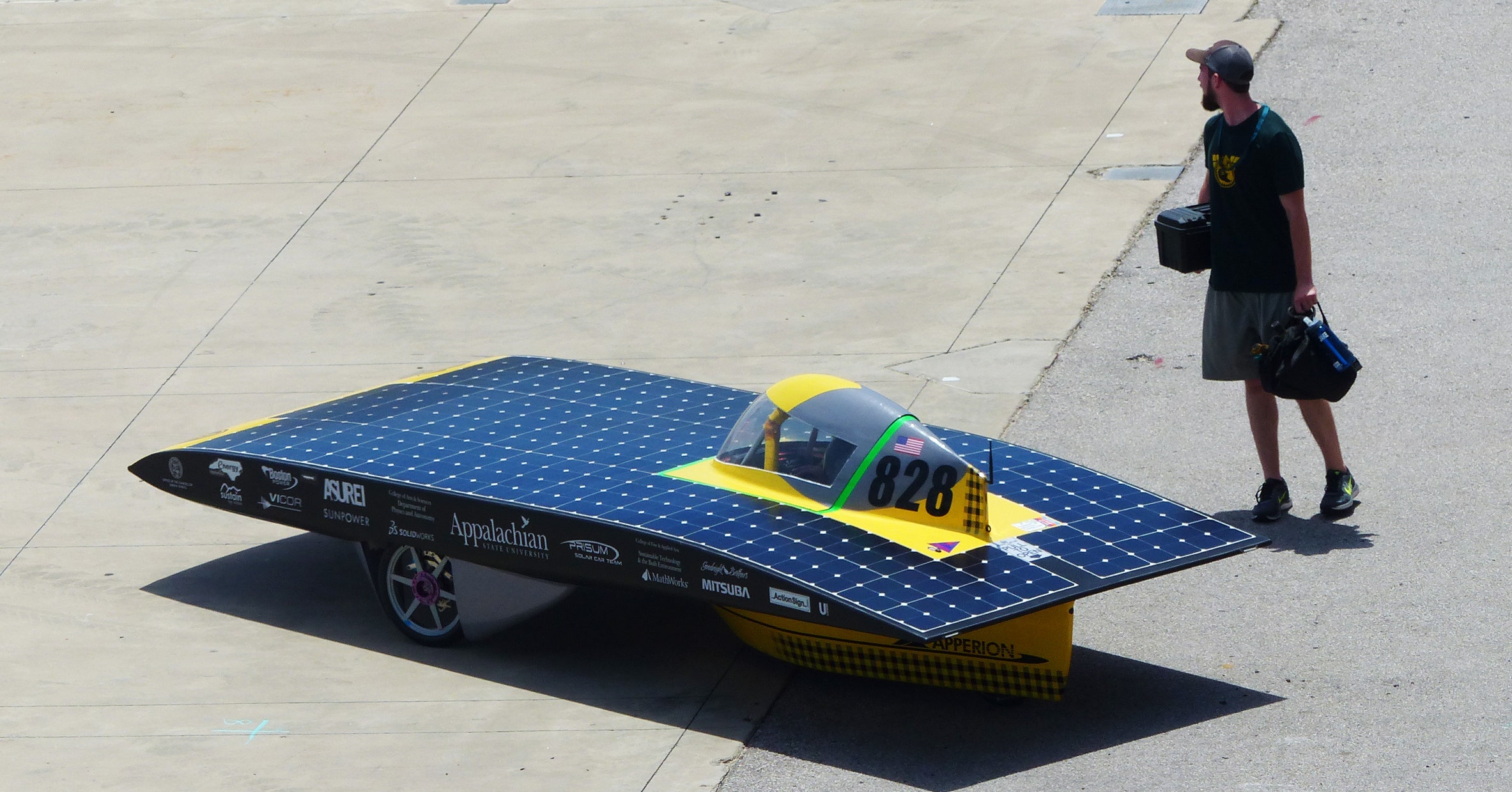 If you happened to be passing through central Idaho in what’s now the Snake River plain some 15,000 years ago, you might have spotted entire fields of lava, covering more than 600 square miles. And if you swung back through the area this past week, you might have spotted an equally alien phenomenon: a little yellow vehicle, 16 feet long, covered in solar panels, and rolling at a stately 30 mph past the long cooled land that’s now called the Craters of the Moon National Monument and Preserve.

For the University of Michigan student stuffed inside the Novum, the Craters of the Moon would have been just one more point of passing interest. The real focus would have been on the Sun overhead—the only source of fuel and the key to taking first place in the 2018 edition of the American Solar Challenge—a 1,700-mile race from Omaha, Nebraska to Bend, Oregon.

For nearly 30 years, races like the American and World Solar Challenge have been proving cars can use solar panels to generate all the power they need. In the sky and on the sea, other pioneers are making a similar point: With the right sort of engineering, the Sun’s rays are all you need to go from point A to B.

As the world’s automakers finally get serious about building electric cars, the question arises: What are the odds they’ll be able to generate their own electricity from solar panels built into the roof, body, and glass, without sacrificing creature comforts like air conditioning, legroom, and the ability to keep up with highway traffic?

The upshot is tantalizing. Cars would be freed not just from their reliance on planet-killing fossil fuels, but from the need for a charging infrastructure whose slow growth remains a major pain point. But the odds, if you must know, are slim. Researchers are working on making solar panels lighter, nicer looking, and more efficient. The next generation of solar materials will be applied like paint, turning a whole vehicle (or just about anything else) into a solar panel. But even such advances are unlikely to make enough power for the average driver’s commute—cars will always have small surface areas compared with their heavy-duty power needs. The good news is that there are other ways to integrate solar power and transportation to make driving greener.

The silicon-based solar cells you see on roofs of houses today are an elegant piece of engineering, the result of a century of experimentation and refinement. They have no moving parts, and silently, continuously, generate electricity whenever it’s light out. But they’re not very efficient, converting just 15 to 20 percent of the energy that falls on them.

That hasn’t stopped automakers from trying to integrate them into vehicles. Henrik Fisker built a solar roof into his ill-fated Karma electric-hybrid, an early rival to Tesla. The company bringing the design back as the Karma Revero has updated the solar setup, and says it can now make 200 watts of electricity per hour. Too bad modern EVs need battery packs with at least 60 kilowatt-hours. Give the Revero eight hours of sunshine, and it can make enough power to drive a mile and a half.

That’s why Toyota bills the optional solar roof on the plug-in Prius Prime as a way to top up the car’s battery. (It doesn’t offer the setup in the US, saying American buyers haven’t shown much interest.) And when WIRED crunched the numbers to see if an EV with more surface area—Tesla’s semi-truck—we found it would take at least 80 hours to fully top up the batteries.

So not much is gonna happen today or tomorrow. But let’s look at where solar’s going. The next step for the tech is multijunction (sometimes referred to as III-V) solar panels, usually based on gallium instead of silicon, which offer much better efficiency—as much as 45 percent more. That means fewer panels on a smaller surface area can do the work, but at a higher cost. “If you want to send a rover to Mars, this is totally what you use,” says Joseph Berry, senior research scientist at the National Renewable Energy Laboratory. They’re also great for satellites, where weight is a more important consideration than cost for designers.

Indeed, while the Mars Curiosity rover got an onboard nuclear generator, its predecessors, Spirit and Opportunity, pootled around Mars on solar power alone. That’s why Opportunity, which has driven 28 miles on the planet since arriving 15 years ago, is currently in hibernation. It’s waiting out a dust storm that has blotted out the Sun and left it unable to charge.

That works for NASA, but back on Earth, car buyers are a little more sensitive to price and prefer to be able to drive on cloudy days. They can look to researchers working on a solar solution that could be not only more efficient, but also cheap: perovskite solar cells, made from low-cost and easy to handle materials. After about a decade of development, the tech is still in the lab but has real potential.

“The notion with the perovskites is we do have a path to 30 percent, but at a much, much, lower price point,” says Berry, who specializes in their development. Perovskite materials can be applied as a liquid, and painted on to surfaces, with metallic ink printed electrodes. “We can print this stuff like you print a newspaper.”

That could provide a new way to coat an entire car with solar generating material. But making the materials stable is still a challenge, according to Berry, and there are plenty of practical questions as well. What happens when a car with an electrically charged surface crashes? Would customers buy a car if they couldn’t choose the paint job? Could manufacturers integrate their application into the factory process?

Maybe then the answer isn’t to put the power generation on the cars themselves, with their limited surface area and hearty power demands. Perovskite materials give researchers the opportunity to cover not just vehicles, but also the garage they sit in, the house that’s attached to, and just about anything else you can think of, like street lights and factory roofs. “We talk about the notion of photovoltaics everywhere,” says Berry.

How about those miles and miles of blacktop on which cars drive? Idaho-based Solar Roadways is among those hoping to put some of that area to work making electricity, using heavy-duty solar panels that could self-defrost and contain lights for road markings. China claims to have opened the world’s first solar road in Jinan, at 1.25 miles long. The complexities may outweigh the advantages. The scale of solar roadways would help with the business case, but engineers have yet to figure out how to replace failed panels without disrupting traffic, or how to easily dig up the roads for pipe work underneath, for example.

With the advent of perovskite solar cells, large generation plants at the grid scale, with panels on factory roofs or in the middle of the desert, will become cheaper to build and operate, making it easier to supply everyone with green (yellow?) power. That’s where the bulk of Berry’s work is focused, and he believes a step change is coming. “That’s certainly what wakes me up in the morning,” he says.

So even if you leave the solar car to crafty college kids trundling across the country, you can be driving on sunshine.